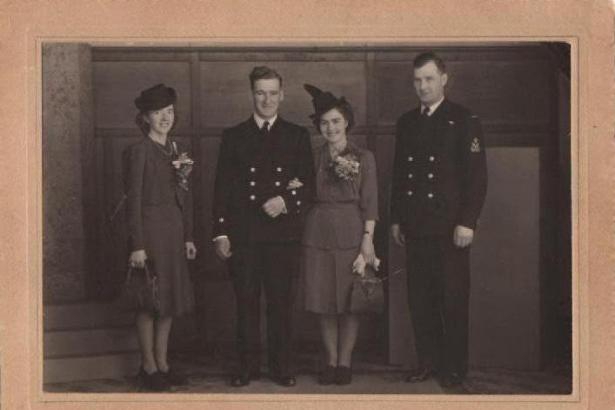 Lost Canadian Ian Munroe's parents on their wedding day June 19, 1944. Despite serving 18 years in the Canadian Navy, Munroe was only granted citizenship after media began reporting about a Citizenship official who questioned whether he was born in wedlock.

Ian Munroe couldn't figure it out. Why wasn't he a Canadian?

"Lost Canadian," is a title referring to potentially tens of thousands of Canadians who, by a continuing set of obscure Canadian citizenship laws, find out they are not Canadian. Being born out of wedlock, not being in Canada on your 24th birthday, being born outside of the country to a Canadian citizen who themselves were born out of the country, were once some of these laws. Many have been since changed, but not all. And Ian Munroe was soon to discover that he was a Lost Canadian.  He was one of the Lost Canadians who face a unique gender injustice and age discrimination at the hands of the government they believed was their own.

According to Citizenship and Immigration Canada, about 170,000 new people become proud Canadian citizens every year. They came from all over the world and are eligible to apply after residing in Canada for three years, learning English or French, and passing a citizenship test.

How could it be that a man like Munroe could live in Canada for over 60 years, serve for 18 years in the Canadian Navy, even have Métis blood and still not be considered a Canadian citizen?

"I'd more or less given up, because I was told I never had a chance in hell," Munroe said with a laugh over the phone from his home in Chester, Nova Scotia.  For 25 years, Munroe had made futile efforts penning letters to the editor, phoning up Liberal, Conservative and NDP MPs to help address the situation that he was wrongfully being denied citizenship.

Munroe's story is emblematic of his generation: his father was in the Canadian Navy during the Second World War, and married a Scottish woman he met while overseas. Munroe arrived with his mother in Halifax as an infant in 1946, and lived as most Canadians do: working, paying taxes, and even serving in the Canadian Navy. Yet he was one of the thousands of Lost Canadians-- legitimate Canadians who have been stripped of or denied citizenship due to arcane and discriminatory laws. Munroe's story illustrates the injustice of policies that exclude even the most deserving Canadians of citizenship. It's a situation the Harper administration has long known about, yet has been reluctant to address.

After years of wrangling, Munroe had almost given up his dream for Canadian citizenship and passport. It wasn't so inconvenient at first: by his own admission, Munroe wasn't a fan of air travel and preferred to be traveling by sea on his "beautiful little 29-foot sailboat".

But the importance of having citizenship hit home when he found out five years ago that one of his best friends in the U.S. was dying of cancer.

"I had no interest in getting a passport, but when my friend got sick...I couldn't even cross the border to see him." After 9/11, border controls were tightened, and Canadians who were previously only required to show a driver's license or birth certificate to cross the border were now expected to show a have a passport.

"I couldn't even go to his funeral," Munroe recalled, his voice tinged with regret.

His wife then urged him to fight once more for his citizenship. It wasn't just for the passport, but Munroe was 62 at the time and would soon be in need of his pension. If the government refused to issue him a Canadian passport, what were the odds of him receiving his old age pension?

In November, 2010, Munroe met with Melynda Jarratt, owner of Maven New Media in Fredericton, New Brunswick, where she arranged for him to gather his papers and meet her local MP and apply for citizenship.

"I'm extremely fortunate in that my mother never threw anything out," Munroe said.

"Everything was kept – I had even my father's birth certificate.  I have photos from the 1840s from my (Canadian) father's family and even have a letter written by one of my great great grandfathers in Canada in 1834."

All of Munroe's documents demonstrated his family's undeniable Canadian heritage: his father's side of the family had been in Canada for over 100 years. Jarratt convinced Munroe to send copies of his papers and a letter explaining his situation.

"I wrote to (Citizenship and Immigration Minister) Jason Kenney, I wrote to my MP, I wrote to the Prime Minister," Munroe recalled.

"Not one of them answered me. Not one."

In March 2011, after months of silence from the government, Munroe's phone suddenly rang. A CIC representative named Stella Holiday called him was on the other line, asking him what he felt to be an inappropriate question.

"She asked me outright: were my mother and father married when I was born? I said, I sent it to you! You've got it (the marriage certificate) right in front of you!"

Whether Holiday realized it or not, asking Munroe that question was off-limits: basing his citizenship on his mother's marital status was grounds for gender discrimination, according to the Canadian Human Rights Act. It was also in blatant violation of the Canadian Charter of Rights and Freedoms to question the legitimacy of his application based on his mother's marital status (fortunately for Munroe, his parents were married at the time of his birth).