In their fight for consultation on the China-Canada FIPA agreement, the Hupacasath First Nation have also managed to expose the mechanisms within the investor state agreement which could change the legislative climate across the country, regardless of where public opinion lies on issues such as the Northern Gateway. 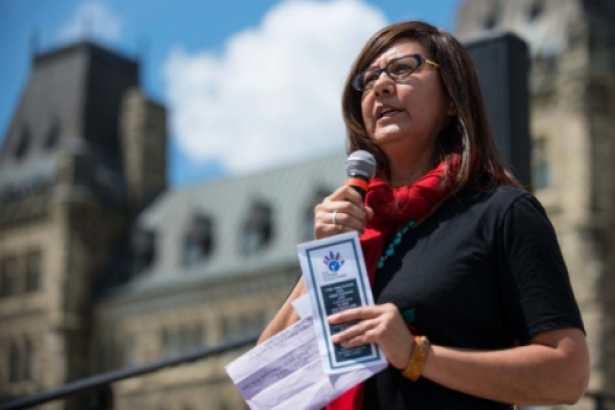 On a sunny day in Vancouver, a large crowd milled around in the lobby of the federal courthouse. Attendees shared stories of what had drawn them here, to witness the appeal of the Federal Court ruling on Hupacasath First Nation v. Canada.

“I came because this issue really affects Canadian sovereignty,” says Jan Slakov, who travelled over from Salt Spring Island to show her support for the Hupacasath as they bring their case against Canada. “This particular struggle offers an amazing opportunity to connect with First Nations, human rights activists concerned about rights in China, and environmentalists. It felt very important to come.”

At stake is the Canada China FIPA, an investment treaty that was signed 18 months ago but sits in limbo. The deal is waiting for an Order in Council to be ratified into law. The Hupacasath, a small nation from Port Alberni on Vancouver Island, charge that provisions within FIPA—namely jurisdiction over resource use in their traditional territories—should have triggered the government’s duty to consult with them under Section 35 of the Constitution.

June 10 was the second attempt by the Hupacasath and their allies to claim those Section 35 rights.

Mark Hume, writing in the The Globe and Mail, said that the upshot of a Hupacasath victory in court would force Canada into an unwieldy consultation process with all 600 of Canada’s First Nations. Grand Chief Stewart Phillip, who submitted an affidavit on behalf of the Union of BC Indian Chiefs, coolly dismisses the notion that any entity, be it China or Chevron, should sidestep their duties to  consult with First Nations on matters that affect their traditional territories.

“Canada and BC …can’t simply bypass their legal obligations when it comes to consultation. Canada has no right to negotiate with Chinese investors over land it does not own.”

It is an exhausting reality for First Nations —many of them impoverished and fatigued from interminable treaty negotiations. In the face of eroding democracy and encroaching oil and gas projects, their Constitutional rights must be constantly —and expensively—defended in court. “Hearings like this are just another day at the office,” says Chief Phillip wryly.

Though the powers that be may not ‘get it’ when it comes to realizing reconciliation with First Nations, some ordinary citizens do. According to Hupacasath member Brenda Sayers—who is a driving force behind this challenge—people have shown extraordinary support for the court actions. Through crowdfunding promoted by Lead Now, the Council of Canadians and the Green Party of Canada, thousands of Canadians gave $20 and $30 donations to raise almost $300,000 for the Hupacasath to take this challenge to the courts.

Sayers, a former Hupacasath councillor, traveled across the country to raise awareness—and funds—for the appeal. “One of the things this Hupacasath case has done is to create space for MPs, MLAs, City Councils, Chief & Councils, Tribal Councils, and provincial leaders to obtain legal advice on FIPA and take a stand,” she said.

Supporters have collected signatures on petitions and held town halls to bring the complex and problematic elements of the FIPA to light.  “It’s an issue that affects people all across Canada. The FIPA presents us with an opportunity to connect,” comments Sayers.

“I’ve had more mail and emails on FIPA from my constituents than on any other issue,” says Vancouver M.P. Don Davies. Hupacasath supporters include the Canada Postal Union, the BCTF, the Union of BC Indian Chiefs and Idle No More.

“It blew the door off the back room”

Signed in Vladivostok, Russia, back in September 2012, the agreement would allow unelected officials to adjudicate trade disputes between Canada and China in offshore tribunals. Unlike other FIPAs we’ve signed with Columbia, Peru and South Korea, this one allows either China or Canada to refuse to make a hearing public—practices which, according to Davies, “violate fundamental rule of law precepts.”

While Harper tried to sneak the FIPA though in secrecy, Canadians have the Hupacasath to thank for sounding the alarm.

“It blew the door off the back room,” says Grand Chief Stewart Phillip of the UBCIC. “Everybody got to find out what the Harper government was up to.”

“So it’s an incredible case. It’s an exciting case”.

FIPA: A gateway to Enbridge pipeline across BC?

The FIPA appeal comes during the same week as British Columbians anxiously wait for Harper to declare his decision on the Northern Gateway pipeline, expected any day now.