VO contributing education editor Patti Bacchus knows most of the candidates. Here’s her first take on who is on the ballot. 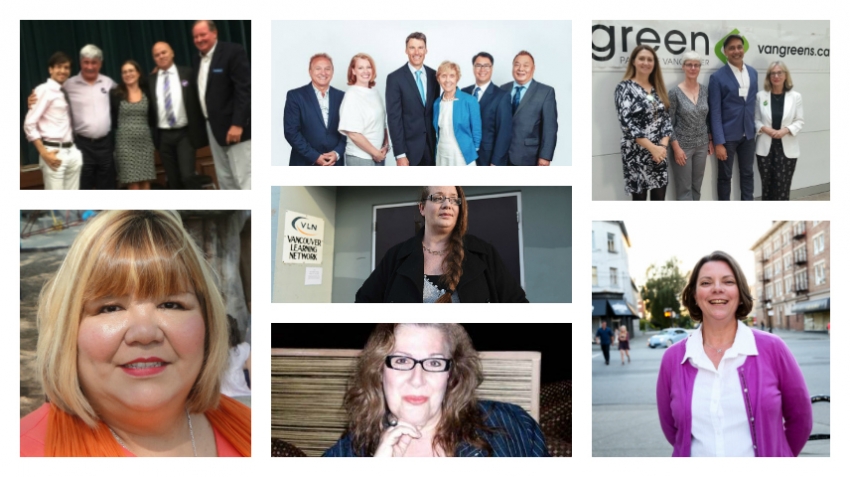 Nominations close today (September 8) in the race to see who will take the nine trustee seats in the Vancouver School Board (VSB) by-election.

By my count there are 17 candidates so far vying for the spots to serve a one-year term — until the October 2018 elections.

I know a thing or two about running for school board after running successfully in three elections and serving eight years as a trustee. I know most of the candidates in the race this time, but not all of them. Here’s my totally biased rundown on what I’m seeing so far, in alphabetical order.

Joy Alexander (Vision Vancouver). First elected in 2014, when she got the second highest number of votes despite being her first run for public office, Alexander is an experienced educator and psychologist with a depth of knowledge about how students learn and what they need to succeed. I had the pleasure of serving with Joy for two years and learned a great deal from her and appreciated her expertise and advice on complex education issues. She is analytical and can quickly get to the heart of an issue and consistently puts students first when it comes to setting priorities.

Fraser Ballantyne (Non-Partisan Association). This will be Ballantyne’s third run for the board after being elected in 2011, when he squeaked in at ninth place and again in 2014. Ballantyne has a reputation for being hot tempered at the board table and once shouted “shut up” at a public board meeting. He ran on a pledge to stop school closures in 2014 yet frequently criticized Vision trustees for not closing schools. He served as chair for five months. I’m trying to think of a cause he championed or an idea he brought to the table, but as far as I recall his sole cause had to do with how many metres marijuana dispensaries could be from schools.

Carrie Bercic (One City). Bercic is a long-time public education advocate who has a better attendance record at public VSB meetings than some trustees did. She knows the issues well and she’s well known in the district. Bercic called the firing of the previous board “the most shocking thing” she’d seen in 18 years as a public education advocate. She’s been involved in a group that advocates for school libraries along with other parent groups. I’ve known Carrie for several years and I believe she’d make a strong school trustee who could work across party lines and who would put students at the forefront of her decision making.

Ken Clement (Vision Vancouver). The first time I ran for the VSB (2008) I was lucky to run alongside Clement. He was elected twice — in 2008 and 2011 — and came tenth in 2014, just missing a seat on the board. As the first Aboriginal candidate to be elected in Vancouver, Clement worked to improve opportunities and outcomes for Aboriginal students. He played a key role in establishing the district’s Aboriginal Focus School and graduation rates for Aboriginal students steadily improved with Clement’s leadership. He also chaired the VSB committee that developed and steered the district’s progressive, ground-breaking sexual orientation and gender identity policy revisions in 2014 that drew international media coverage. A member of the Ktunaxa First Nation and a residential school survivor, Clement’s leadership and commitment to social justice are much needed as the VSB fulfills its commitment to Reconciliation and equitable learning opportunities for all students.

Diana Day (COPE). Day is COPE’s sole by-election candidate — which is surprising given COPE’s historical commitment to public education and the VSB. I was inspired to run the first time after seeing what a difference COPE trustees’ advocacy made for students. I’ve known and liked Day for almost a decade. She’s served on the executive of the district parent advisory council and has a solid record in community and social work. The COPE website describes her as “an Indigenous First Nations from the Oneida Nation, one of the members of the Six Nations Iroquois Confederacy” and says she’s passionate about social justice issues for all students in the VSB, and in particular advocates for successful culturally safe learning environments for vulnerable youth.