North America's leading female activist says women are "first responders" when it comes to standing up for peace and justice. 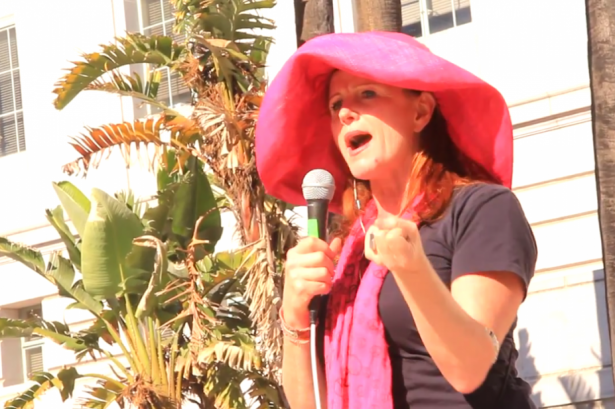 Jodie Evans learned early that activism is a full time job. It’s one she’s been doing for decades.

The then-maid went on to become the founder of CODEPINK, an international women-led movement for peace and social justice.

“I found my voice, and maids got a living wage, which was amazing.”

In November 2002, she joined her friends Medea Benjamin, Diane Wilson and about 100 other women on Capitol Hill to begin a four-month vigil to protest the war in Iraq. By March 8, 2003—International Women’s Day—they had captured the country’s attention, and that day they gathered over 10,000 pink-clad demonstrators to encircle the White House.

It was the beginning of what was to become an international women's movement, CODEPINK. Co-founded by Evans and Benjamin, the organization has grown from a small group of women with hot pink signs to a worldwide movement taking on a number of a number of urgent issues.

Nine years after that first Women’s Day march, Evans is constantly on the go, planning protests, speaking at conferences and putting high-profile politicians on the spot.

After her march for the living wage, Evans’ early experience was as an anti-war activist, a role she took up after having lost two friends in Vietnam. She joined the campaign for Democratic presidential candidate George McGovern, whose platform advocated for an end to the war. And despite his loss in the election, Evans says the experience led to substantial progress and tangible outcomes—like earning 18-year-olds the right to vote.

“We didn’t disappear, and we didn’t give up. Instead we made it happen. So many good things came out of the activists from McGovern,” she said.

Fast forward to the Bush Administration in 2002, when U.S. Congress was about to hear the Iraq War resolution authorizing a preemptive strike on the Middle Eastern country. Evans and her colleagues knew they had to do something to try to stop this, and to spread their message of peace.

They were already part of an activist group called Unreasonable Women for the Earth, which had been calling “Code Hot Pink” to get ladies more engaged in environmental issues. They decided it would be the perfect slogan for their anti-war efforts, but came across a little roadblock when they tried to set up a website.

“We found out that Code Hot Pink was a sex site, so we had to switch it to CODEPINK,” laughed Evans.

“It was definitely to play off of Bush’s attempts at frightening the country, with his Code Orange and Code Red and Code Yellow. It was to call “Code Pink” for peace,” she said.

Ever since their highly visible stunts at the White House—at one point they stripped down to their bras in front of TV cameras to reveal hot pink doves they’d painted on—the women of CODEPINK have continued to keep the pressure on American policymakers. They have chased down officials guilty of war crimes, confronted politicians at private dinners and in Congress, and even convinced the U.S. Conference of Mayors to pass an anti-war resolution.

But despite their successes and creative tactics, Evans says she still feels like it’s never enough.

“What I’ve learned is that we never speak loud enough. We never are as aggressive with our truth as they are with their lies,” she said.

Just recently, Evans disrupted a fundraiser for President Barack Obama, urging him to use his leadership to ensure that the country does not go to war with Iran. Obama’s reply, according to Evans, was dismissive and sexist.

“He said, ‘Aren’t you jumping the gun, young lady?’ But it’s exactly then that you end wars. As we can see, once you start the getting out part is incredibly hard,” she said.

'They had weapons pointed at our heads,' recalls secret Gaza flotilla activist

Anne Giardini: Be as intelligent as you are